2022 ANNUAL DINNER
Kathi Durst '81 highlighted an amazing evening with familiar and new faces. Over 60 folks attended the evening, including Dean of Faculty, Brigadier General Letendre and over 25 Spectrum Cadets. See links below for the official program and photos of the event.
2022 DINNER PHOTOS
2022 DINNER PROGRAM 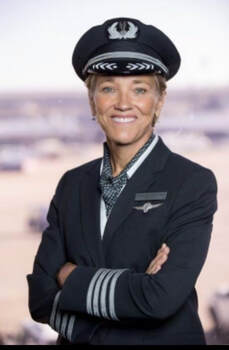 ​Captain Kathi Durst – American Airlines, B777 Check Airman
Being a trailblazer is nothing new for Captain Kathi Durst. In 1981 she graduated from the U.S. Air Force Academy, in only the second class that admitted women. In 2012, Captain Durst also became the first female pilot in a Fleet management leadership role in American Airlines’ history when she stepped up to assume the Fleet Captain position for the Boeing 737 fleet. Two years later in 2014, Captain Durst broke new ground. She was named one of four Chief Pilots at American's largest hub, DFW — the first woman to carry this mantle. Captain Durst is a former Check Airman (Instructor Pilot) on both the Airbus A300 and Boeing 737 fleets before taking over the Boeing 737 Fleet Captain role. She currently instructs for American Airlines on the Boeing 777 fleet.
Upon graduating from the U.S. Air Force Academy in 1981, Captain Durst spent her seven-year Air Force career flying the Northrop T-38 at Williams AFB in Phoenix. In that time, she was an Instructor Pilot, Check Section Evaluator, Academic Officer, and the Student Squadron Executive Officer. While in Arizona, she earned a Master’s degree in Aeronautical Science from Embry-Riddle Aeronautical University.
Kathi has also has spent a great deal of time mentoring young pilots through both the Women in Aviation International group and the National Gay Pilots Association, and is a passionate advocate for diversity and inclusiveness at American Airlines and in her community. To that end, Captain Durst was selected as a 2014 recipient of the 6th Annual Earl G. Graves Award for Leadership in Diversity. Additionally, she currently sits on the Board for Z.A.S.A. (Zoomies Against Sexual Assault) which combats sexual trauma at the Air Force Academy.
Kathi lives in Las Colinas, TX with her spouse Sheri, a retired American Airlines Flight Attendant